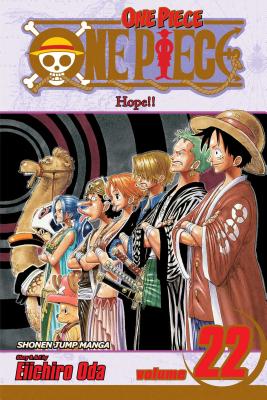 This is book number 22 in the One Piece series.

When Crocodile's evildoing is revealed, the rebellion that will destroy Alabasta just might be averted... But the Baroque Works will do everything in their power to make sure that doesn't happen--even if they have to kill Princess Vivi! The Straw Hats will have the fight of their lives to keep this evil Croc from getting his way!
Eiichiro Oda began his manga career at the age of 17, when his one-shot cowboy manga Wanted! won second place in the coveted Tezuka manga awards. Oda went on to work as an assistant to some of the biggest manga artists in the industry, including Nobuhiro Watsuki, before winning the Hop Step Award for new artists. His pirate adventure One Piece, which debuted in Weekly Shonen Jump magazine in 1997, quickly became one of the most popular manga in Japan.