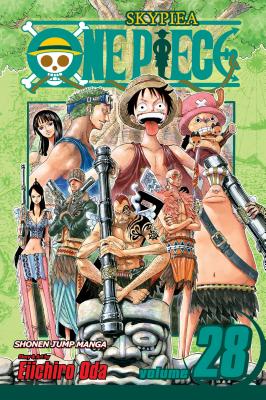 This is book number 28 in the One Piece series.

The Straw Hat pirates embark on a plan to become superrich. They just have to find the hidden treasure in El Dorado, the lost city of gold, and then make a getaway on their ship. But unknown terrors lurk around every corner of this island paradise known as Skypiea, including a tyrant named Eneru who enjoys making a game of death!
Eiichiro Oda began his manga career at the age of 17, when his one-shot cowboy manga Wanted! won second place in the coveted Tezuka manga awards. Oda went on to work as an assistant to some of the biggest manga artists in the industry, including Nobuhiro Watsuki, before winning the Hop Step Award for new artists. His pirate adventure One Piece, which debuted in Weekly Shonen Jump magazine in 1997, quickly became one of the most popular manga in Japan.