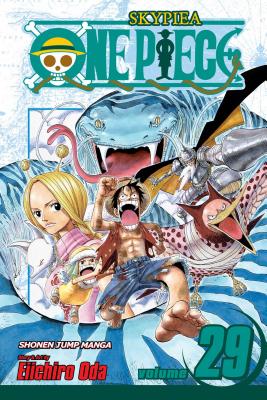 This is book number 29 in the One Piece series.

The Straw Hats have been stuck in a struggle for survival ever since Eneru made the ominous prediction that "in three hours, only five humans will be left standing on the island." Separated from each other, the crew eventually cross paths on the battlefield where the war for Skypiea is being waged!
Eiichiro Oda began his manga career at the age of 17, when his one-shot cowboy manga Wanted! won second place in the coveted Tezuka manga awards. Oda went on to work as an assistant to some of the biggest manga artists in the industry, including Nobuhiro Watsuki, before winning the Hop Step Award for new artists. His pirate adventure One Piece, which debuted in Weekly Shonen Jump magazine in 1997, quickly became one of the most popular manga in Japan.