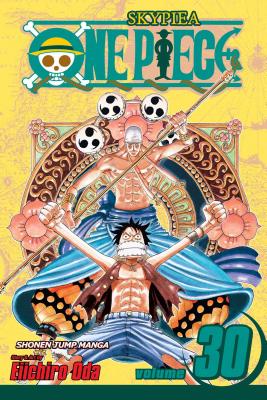 This is book number 30 in the One Piece series.

As Kami Eneru plans to obliterate Skypiea with all his unsuspecting followers on it, Nami can only stand by as he wipes out the Straw Hats. Switching allegiances in order to survive, all she can do is hope for a savior. Could the best defense against a deadly lightning bolt from above be a certain rubbery pirate?!
Eiichiro Oda began his manga career at the age of 17, when his one-shot cowboy manga Wanted! won second place in the coveted Tezuka manga awards. Oda went on to work as an assistant to some of the biggest manga artists in the industry, including Nobuhiro Watsuki, before winning the Hop Step Award for new artists. His pirate adventure One Piece, which debuted in Weekly Shonen Jump magazine in 1997, quickly became one of the most popular manga in Japan.