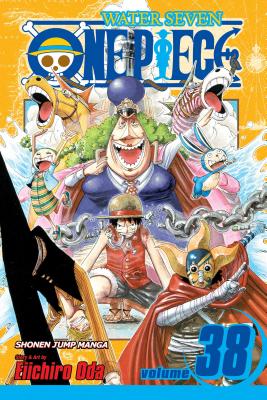 This is book number 38 in the One Piece series.

After finding out the real reason for Robin's betrayal, the Straw Hats are in a madcap race to rescue her from CP9, the Navy's elite assassin group. But first they'll have to find a way to sail through the tidal wave known as Aqua Laguna. Will the Rocketman be seaworthy for the task at hand, or will it be a runaway train to catastrophe?!
Eiichiro Oda began his manga career at the age of 17, when his one-shot cowboy manga Wanted! won second place in the coveted Tezuka manga awards. Oda went on to work as an assistant to some of the biggest manga artists in the industry, including Nobuhiro Watsuki, before winning the Hop Step Award for new artists. His pirate adventure One Piece, which debuted in Weekly Shonen Jump magazine in 1997, quickly became one of the most popular manga in Japan.