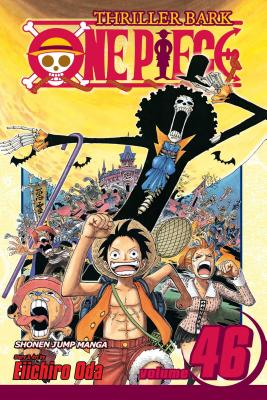 This is book number 46 in the One Piece series.

When the Straw Hats encounter a mysterious barrel on the open sea, little do they know that it's a trap. Losing control of their ship, they're steered toward Thriller Bark. Any rational sailor would think twice before going ashore on an island full of zombies. But with Luffy at the helm, the Straw Hats are in for a scare as they become the targets of the dreaded Gecko Moria!
Eiichiro Oda began his manga career at the age of 17, when his one-shot cowboy manga Wanted! won second place in the coveted Tezuka manga awards. Oda went on to work as an assistant to some of the biggest manga artists in the industry, including Nobuhiro Watsuki, before winning the Hop Step Award for new artists. His pirate adventure One Piece, which debuted in Weekly Shonen Jump magazine in 1997, quickly became one of the most popular manga in Japan.