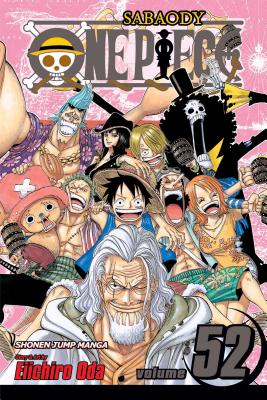 This is book number 52 in the One Piece series.

In his effort to save Camie the mermaid from being sold to the highest bidder, Luffy's attack on an exalted Celestial Dragon has given the Navy the green light to send the Admirals in after him. But the Straw Hats get help from an unexpected source--a mysterious outlaw who knows all about Gold Roger, the original King of the Pirates!
Eiichiro Oda began his manga career at the age of 17, when his one-shot cowboy manga Wanted! won second place in the coveted Tezuka manga awards. Oda went on to work as an assistant to some of the biggest manga artists in the industry, including Nobuhiro Watsuki, before winning the Hop Step Award for new artists. His pirate adventure One Piece, which debuted in Weekly Shonen Jump magazine in 1997, quickly became one of the most popular manga in Japan.