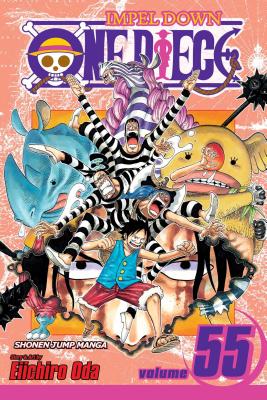 This is book number 55 in the One Piece series.

Luffy's got some backup in his former enemies Buggy the Clown, Mr. 2 Bon Clay and Mr. 3 as he tries to rescue his brother from Impel Down prison. But now Warden Magellan, with his Venom-Venom powers, is out to stop him! Can Luffy survive such a dangerous attack from a person whose very breath is a deadly weapon, or could his ace in the hole possibly be a "queen"?
Eiichiro Oda began his manga career at the age of 17, when his one-shot cowboy manga Wanted! won second place in the coveted Tezuka manga awards. Oda went on to work as an assistant to some of the biggest manga artists in the industry, including Nobuhiro Watsuki, before winning the Hop Step Award for new artists. His pirate adventure One Piece, which debuted in Weekly Shonen Jump magazine in 1997, quickly became one of the most popular manga in Japan.