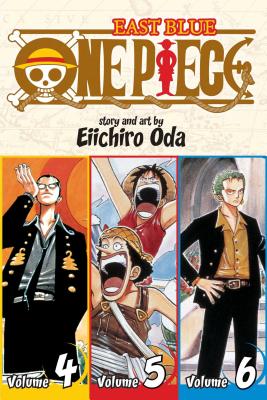 This is book number 2 in the One Piece (Omnibus Edition) series.

Usopp is the local liar who likes to stir up trouble by shouting "The pirates are coming!" But he never expected his harmless prank to become a reality! Captain Kuro of the Black Cat Pirates has been lying low, posing as a mild-mannered butler while waiting for the right time to strike it rich with his devious plan. With no one believing him, all hope seems lost for Usopp--until he has Luffy on his side!
Eiichiro Oda began his manga career at the age of 17, when his one-shot cowboy manga Wanted! won second place in the coveted Tezuka manga awards. Oda went on to work as an assistant to some of the biggest manga artists in the industry, including Nobuhiro Watsuki, before winning the Hop Step Award for new artists. His pirate adventure One Piece, which debuted in Weekly Shonen Jump magazine in 1997, quickly became one of the most popular manga in Japan.