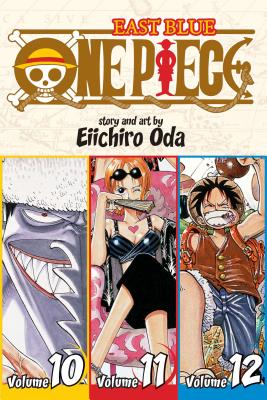 This is book number 4 in the One Piece (Omnibus Edition) series.

There's something fishy going on in Nami's hometown that's led her to turn her back on her family and friends. But her betrayal is all for naught when the unscrupulous captain of the fish-man pirates, "Sawtooth" Arlong, goes back on his word. When her fellow villagers gear up to challenge a merciless foe who can easily crush them, her only hope for peace is to turn to the very people she has been lying to… the Straw Hat Pirates!
Eiichiro Oda began his manga career at the age of 17, when his one-shot cowboy manga Wanted! won second place in the coveted Tezuka manga awards. Oda went on to work as an assistant to some of the biggest manga artists in the industry, including Nobuhiro Watsuki, before winning the Hop Step Award for new artists. His pirate adventure One Piece, which debuted in Weekly Shonen Jump magazine in 1997, quickly became one of the most popular manga in Japan.