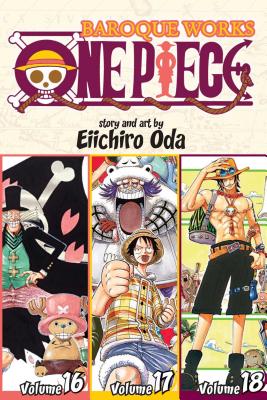 This is book number 6 in the One Piece (Omnibus Edition) series.

When a demented king shows up to reclaim his island kingdom, Luffy and his crew are there to stop him! As the Straw Hats battle the royal interlopers, they get to know all about eccentric Dr. Hiriluk and his reindeer assistant, Tony Tony Chopper. But can they possibly overcome King Wapol— whose body changes depending on what he eats—and survive the scheming of the Baroque Works crew on the island of Alabasta?
Eiichiro Oda began his manga career at the age of 17, when his one-shot cowboy manga Wanted! won second place in the coveted Tezuka manga awards. Oda went on to work as an assistant to some of the biggest manga artists in the industry, including Nobuhiro Watsuki, before winning the Hop Step Award for new artists. His pirate adventure One Piece, which debuted in Weekly Shonen Jump magazine in 1997, quickly became one of the most popular manga in Japan.