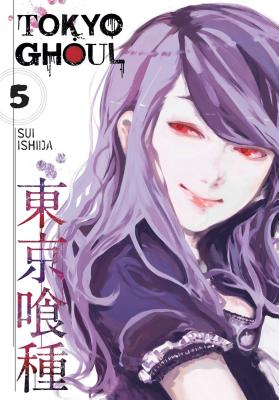 This is book number 5 in the Tokyo Ghoul series.

Kaneki, Nishio and Touka struggle to work together to rescue their human friend Kimi while Ghoul Investigator deaths skyrocket in wards 9 through 12. It all leads to an increase in CCG agents and an increased risk for Ghouls. As reinforcements are called in on both sides, the stakes are suddenly higher than ever.
Sui Ishida was born in Fukuoka, Japan. He is the author of Tokyo Ghoul and several Tokyo Ghoul one-shots, including one that won him second place in the Weekly Young Jump 113th Grand Prix award in 2010. Tokyo Ghoul began serialization in Weekly Young Jump in 2011 and was adapted into an anime series in 2014.