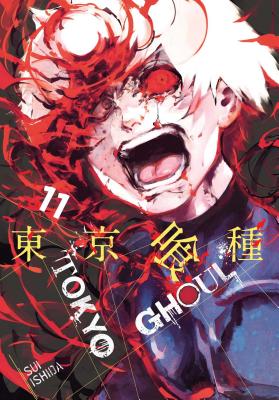 This is book number 11 in the Tokyo Ghoul series.

Amid clashes between Ghouls and the Commission of Counter Ghoul investigators at Doctor Kano’s underground facility, Kaneki finds himself locked in battle with Special Class Ghoul investigator Yukinori Shinohara. When the battle subsides, the CCG discovers shocking evidence that leads them closer to discovering the truth behind Kano’s sinister plans.
Sui Ishida was born in Fukuoka, Japan. He is the author of Tokyo Ghoul and several Tokyo Ghoul one-shots, including one that won him second place in the Weekly Young Jump 113th Grand Prix award in 2010. Tokyo Ghoul began serialization in Weekly Young Jump in 2011 and was adapted into an anime series in 2014.