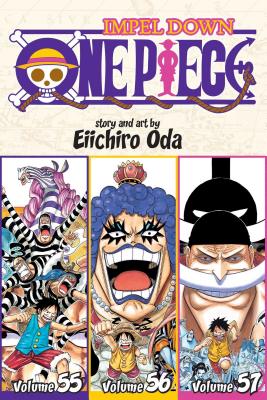 This is book number 19 in the One Piece (Omnibus Edition) series.

Luffy’s brother, the infamous pirate Portgaz D. Ace, is being held at Impel Down prison…and he’s scheduled for the chopping block! While breaking into the daunting underwater dungeon to rescue his next of kin, Luffy encounters former enemy Buggy the Clown and the toxically terrible Warden Magellan. Before long, what started as a prison break turns into all-out war with the World Government!
Eiichiro Oda began his manga career at the age of 17, when his one-shot cowboy manga Wanted! won second place in the coveted Tezuka manga awards. Oda went on to work as an assistant to some of the biggest manga artists in the industry, including Nobuhiro Watsuki, before winning the Hop Step Award for new artists. His pirate adventure One Piece, which debuted in Weekly Shonen Jump magazine in 1997, quickly became one of the most popular manga in Japan.