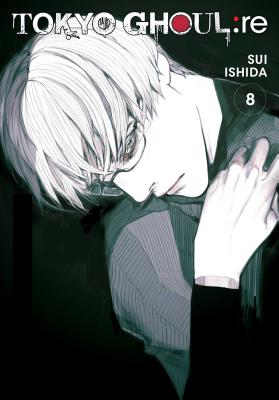 This is book number 8 in the Tokyo Ghoul: re series.

While Haise is determined to help his old friends escape from Cochlea prison, he doesn’t want to hurt any of his CCG colleagues. But his mentor Kisho Arima takes the decision out of Haise’s hands, confirming some of Haise’s greatest fears about the organization that has become his whole life. He lost everything once before. How will he handle it happening again?!
Sui Ishida was born in Fukuoka, Japan. He is the author of Tokyo Ghoul and several Tokyo Ghoul one-shots, including one that won him second place in the Weekly Young Jump 113th Grand Prix award in 2010. Tokyo Ghoul began serialization in Weekly Young Jump in 2011 and was adapted into an anime series in 2014.