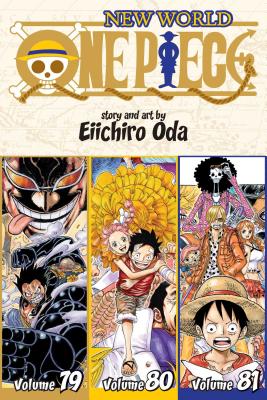 This is book number 27 in the One Piece (Omnibus Edition) series.

As the clash with evil warlord Doflamingo intensifies and the fate of the island people of Dressrosa hangs in the balance, Luffy decides it’s time to switch gears! Then, when a beastly new enemy enters the scene, Luffy’s faithful compadres Sanji and Nami are separated from the gang. The Straw Hat crew must seek out their missing members in a bizarre animal kingdom!
Eiichiro Oda began his manga career at the age of 17, when his one-shot cowboy manga Wanted! won second place in the coveted Tezuka manga awards. Oda went on to work as an assistant to some of the biggest manga artists in the industry, including Nobuhiro Watsuki, before winning the Hop Step Award for new artists. His pirate adventure One Piece, which debuted in Weekly Shonen Jump magazine in 1997, quickly became one of the most popular manga in Japan.