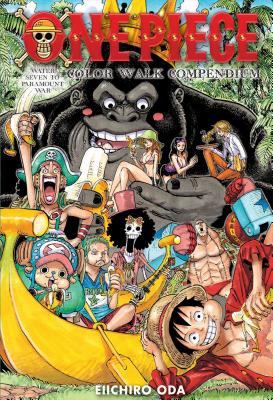 This is book number 2 in the One Piece Color Walk Compendium series.

Color images and special illustrations from the world’s most popular manga, One Piece! This compendium features over 300 pages of beautiful color art as well as interviews between the creator and other famous manga artists, including Taiyo Matsumoto, the creator of Tekkonkinkreet.

This second volume continues to showcase the artful adventures of the One Piece series.  From the Water Seven arc, where the Straw Hats encounter the sinister CP9 organization, to the Paramount War arc that follows their journey to Marineford where Luffy’s brother Ace resides.
Eiichiro Oda began his manga career at the age of 17, when his one-shot cowboy manga Wanted! won second place in the coveted Tezuka manga awards. Oda went on to work as an assistant to some of the biggest manga artists in the industry, including Nobuhiro Watsuki, before winning the Hop Step Award for new artists. His pirate adventure One Piece, which debuted in Weekly Shonen Jump magazine in 1997, quickly became one of the most popular manga in Japan.