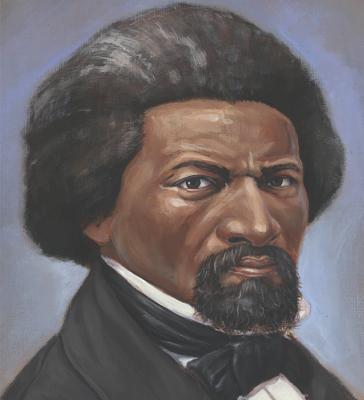 This is book number 8 in the A Big Words Book series.

A thought-provoking portrait of celebrated human-rights activist Frederick Douglass by the acclaimed author of To Dare Mighty Things and Martin's Big Words.

Frederick Douglass was born a slave. He was taken from his mother as a baby, and separated from his grandparents when he was six. He suffered hunger and abuse, but miraculously, he learned how to read. Frederick read newspapers left in the street, and secretly collected spellings from neighborhood children. Words, he knew, would set him free. When Frederick was twenty, he escaped to the North, where he spread his abolitionist beliefs through newspaper articles, autobiographies, and speeches. He believed that all people-regardless of color or gender-were entitled to equal rights. It is Douglass's words, as well as his life, that still provide hope and inspiration across generations.

In this installment of the critically acclaimed Big Words series, Doreen Rappaport captures Frederick's journey from boy to man, from slavery to freedom, by weaving Frederick's powerful words with her own. London Ladd's strong and evocative illustrations combine with the text to create a moving portrait of an extraordinary life.
Doreen Rappaport has written numerous award-winning books for children, including Freedom Ship and The School Is Not White (both illustrated by Curtis James); Martin's Big Words: The Life of Dr. Martin Luther King, Jr., a Caldecott Honor Book and Coretta Scott King Honor Book illustrated by Bryan Collier; and John's Secret Dreams: The Life of John Lennon, also illustrated by Bryan Collier.

London Ladd has illustrated a number of children's books, including the award-winning March On! The Day My Brother Martin Changed the World by Christine King Farris, Under the Freedom Tree by Susan VanHecke, and Lend a Hand by John Frank. He teaches art at an inner-city after-school program, and hopes to one day open an art center so that families can develop projects of their own. He lives and creates in Syracuse, New York. Visit him at londonladd.com.
"Brilliantly crafted words, both written and spoken, defined Frederick Douglass’ dedication to the abolition of slavery and achievement of dignity for all peoples. Skillfully weaving together her concise narration with Douglass’ own writings, Rappaport has fashioned an accessible, even riveting biography of the great 19th-century American. Readers will gain an understanding of and empathy for his resolve and drive. Ladd’s powerful and dramatic full-bleed art is richly textured and detailed."—Kirkus Reviews

“Frederick Douglass’ piercing eyes stare directly from the cover of Frederick’s Journey as if to alert readers that the story they are about to share is intense. This true story of determination and courage despite all odds concludes appropriately with Douglass’ own words: ‘If there is no struggle, there is no progress.’ A message worth heeding.” —Booklist

“When you spy a nearly life-sized bust of a notable occupying a large, square, untitled book cover, you know that Rappaport has another fine picture-book biography on offer. While the particulars of Douglass’ story have been covered in children’s books, the seamless insertion of his own words, drawn from speeches and autobiographies, are especially poignant."—The Bulletin of the Center for Children's Books

“There are many longer books that detail the events of Douglass’s life, but this one, in picture-book form, manages to synthesize those details just as well as a longer work might. This is due to Rappaport’s carefully chosen primary source quotations and Ladd’s paintings, which alternate between moments of violence and times of reflection–all resulting in a portrait that is fiery yet dignified.”—The Horn Book