Through the Eyes of the Vikings: An Aerial Vision of Arctic Lands (Hardcover) 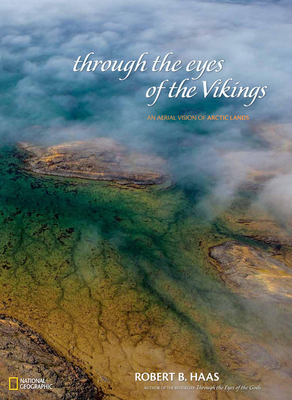 Through the Eyes of the Vikings: An Aerial Vision of Arctic Lands (Hardcover)


Special Order—Subject to Availability
Continuing the aerial photography that gave such visual command to his previous National Geographic titles, Through the Eyes of the Gods: An Aerial Vision of Africa and Through the Eyes of the Condor: An Aerial Vision of Latin America, Haas now trains his lenses on the regions that transect the Arctic Circle. His latest project yields stunning images that show not a "blinding storm of white" as one might think—but rather, a dramatic and surprising diversity of brilliant colors and unexpected subjects. Photographing over a three-year period, Haas captured imagery that reflects three key elements of the region: the arctic landforms, the iconic wildlife, and the footprint of man. This book strives for and succeeds in producing a visual record that will reshape our ideas of what the Arctic has to offer and why we should protect it.
Robert B. Haas is the author and photographer of six photographic books. Since 2002, Haas has focused his artistic endeavors primarily on aerial photography, in an effort to capture the grandeur and mystique of Earth's continents from this unique perspective. His two previous photography books are among the most successful and widely distributed single-photographer books ever published by National Geographic. Haas's photographs have appeared in numerous publications and in exhibits around the world.
“...likely to be his third National Geographic blockbuster…a photo panorama of the vast spaces traveled by early Nordic explorers”—Dallas Morning News

“…breaks through the misconception that the Arctic is barren and colorless. The images Haas makes are awash in red, blue and orange—not just black and white—and full of the natural world that National Geographic books do so well.” –The Sunday Oregonian

“Daredevil aerial photographer Robert Haas probably could have had a circus career if he hadn’t chosen photography. He apparently thinks nothing of hanging outside a plane or helicopter to get just the right shot. And get them he does…showcases Earth’s astonishing beauty and variety from perches most mere mortals would never dare…Haas…is also a terrific writer.
–Dallas Morning News Sunday Gift Guide, Kansas City Star (12/19)

“For most of us, there is probably no part of the world less familiar than the area beyond the Arctic Circle. As Haas’ photos reveal, it’s not a bleak expanse of snow and ice but a starkly beautiful land carved by glaciers, currents, and wind.” –Entertainment Weekly

“Aerial photographer Haas continues his magnificent Through the Eyes series, following volumes on Africa and Latin America with an on-the-wing tour of the Arctic Circle.” –Booklist

“What is left to challenge a man who has made a fortune in mergers and acquisitions and established an international reputation as an aerial photographer? For Robert B. Haas, the next frontier was the Arctic…Haas operates from a helicopter with the door removed, with only a leather harness separating him from security and a face-to-face meeting with his subject matter…likely to be his third National Geographic blockbuster…a photo panorama of the vast spaces traveled by early Nordic explorers.” –Dallas Morning News