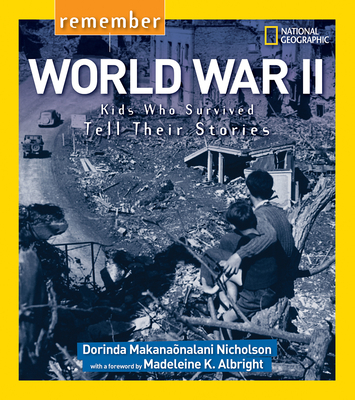 
Not On Our Shelves—Ships in 1-5 Days
Remember World War II: Kids Who Survived Tell Their Stories allows readers to understand the war not as seen through the eyes of soldiers but through the eyes of children who survived the bombings, the blackouts, the hunger, the fear, and the loss of loved ones caused by the war. The author shares her own recollections of being able to see the faces of Japanese pilots as they headed for the naval base at Pearl Harbor to drop their deadly bombs on unsuspecting American ships and soldiers, then shares her feelings at having to leave her father behind as the rest of the family is evacuated to the U.S. mainland.
Dorinda Makanaõnalani Nicholson was born in Hawaii to a Hawaiian mother and a Caucasian father. At the age of six she was an eyewitness to the December 7, 1941, attack on Pearl Harbor. Her first book, Pearl Harbor Child, chronicles that historic event. Nicholson believes it is her mission to bring World War II history to life for children. She is married to Larry Nicholson, an award winning photographer, video producer, and graphic artist. The two combined their talents to create Pearl Harbor Warriors, which won the International Reading Association Intermediate Nonfiction Award, the Benjamin Franklin Multi-Cultural Award, and was selected for the 2003-2004 Mark Twain Master List. The Nicholson’s have four sons and six grandchildren. They live in Raytown, Missouri, with a very spoiled dog named Corduroy.