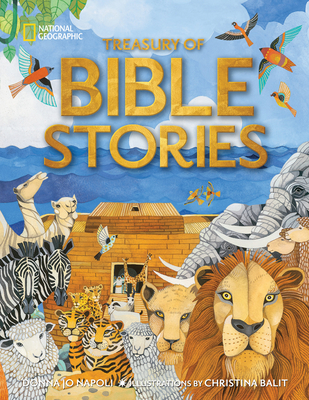 
In Stock—Click for Locations
The timeless tales from the early books of the Bible have captivated generations. In this lush storybook, the fresh voice of lyrical storyteller Donna Jo Napoli and the lavish artwork of Christina Balit bring classic stories to life for a young, modern audience.

Noah's Ark, Moses, David and Goliath, the ten plagues, Daniel and the lions' den, Jonah and the giant fish, and many more of the Bible's most powerful stories--27 in all--are compellingly retold in this beautifully illustrated treasury. Readers will be fascinated by the ancient people and events they encounter, surprised by some of the lesser known accounts revealed, and inspired by the lessons these tales impart. Stories cover important ground beyond religion, such as culture, history, and geography, and they touch on issues that remain relevant today--faith, loyalty, kindness, violence, generosity, greed, jealousy, and more. These accessible, readible stories give kids a rich picture of biblical times, which encourages them to think about our role in the world and to learn more.

Napoli's magicial storytelling is sure to ignite children's imaginations. Along with Balit's stunning art, this is a book kids will want to explore again and again--a classic that families can read aloud together.
DONNA JO NAPOLI is professor of linguistics at Swarthmore College, mother of five, grandmother of two, and the author of more than 70 books for children and young adults. While her undergraduate major was mathematics and her graduate work was in linguistics, she has a profound love of mythology, folklore, and fairy tales.

CHRISTINA BALIT is a graduate of the Chelsea School of Art and the Royal College of Art, London. An award-winning dramatist and illustrator, Christina has painted more than 20 children's books, including Blodin and the Beast by Michael Morpurgo, Zoo in the Sky, The Planet Gods, The Lion Bible, National Geographic's treasury series: Treasury of Greek Mythology, Treasury of Egyptian Mythology, Treasury of Norse Mythology, and Tales From the Arabian Nights. Her author titles include Escape From Pompeii, Atlantis, The Legend of the Lost City, and An Arabian Home. Her plays include Woman With Upturned Skirt, The Sentence, and Needle (winner of the Brave New Role award).
"Napoli brings her literary eye to a yet another ancient tradition. Napoli opens with ebullient prose in her retelling of Creation with a 'wondrous beginning' and 'crystalline start' leading to an Earth that is 'lush' and 'fragrant'… Balit's bold illustrations accompany each tale and feature a diversity of skin tone that reflects the many lands from northeast Africa to the Middle East where the drama unfolds… Sidebars throughout add historical and scientific context to the stories presented while backmatter includes maps, timelines, and brief biographies of the major players. A worthy cultural treasury with appeal to both the faithful and irreligious.” -- Kirkus