Breaking the News: What's Real, What's Not, and Why the Difference Matters (Hardcover) 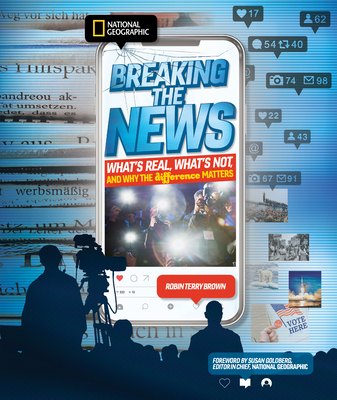 Breaking the News: What's Real, What's Not, and Why the Difference Matters (Hardcover)


Not On Our Shelves—Ships in 1-5 Days
In this timely and relevant title, National Geographic Kids shines a light on the history of news to reveal where we started, how far we've come, and the serious impact that misinterpretation and misinformation can have on the world.

Headlines leap out at us from mobile phones, TV screens, computers, newspapers, and everywhere we turn. Technology has opened up exciting new ways to tell interesting stories, but how much of it is news ... and how much is just noise? This refreshing and up-to-date media literacy book gives kids the tools they need to distinguish what is fact from what is fiction so that they can make smart choices about what to believe.

Topics cover a broad range, from defining freedom of speech, the journalists' code of ethics, the dangers of propaganda, and the future of news.

Packed with profiles of influential journalists, fun facts, and iconic photographs, this ultimate guide to the information age will get kids thinking about their relationship and responsibility to media.
ROBIN TERRY-BROWN graduated from the master's program at Northwestern University's Medill School of Journalism with a passion for writing, editing, and getting the facts straight. She carried this passion throughout her 17-year career as a senior editor with National Geographic. Terry-Brown currently lives with her husband in northern Virginia, where she works as a writer, editor, and truth-seeker.

SUSAN GOLDBERG, contributor, is an award-winning journalist, editorial director of National Geographic Partners, and editor in chief of National Geographic magazine. Prior to National Geographic, Goldberg was an executive editor at Bloomberg News in Washington, D.C. She has also held posts at several news organizations, including The Plain Dealer, San Jose Mercury News, USA Today, the Detroit Free Press, and Seattle Post-Intelligencer. In 2017, Washingtonian magazine named Goldberg one of Washington, D.C.'s most powerful women.
Starred Review. [Breaking the News] provides a sharp-looking survey that examines the history of news-how it began, how it evolved, and what consumers of all ages must consider before accepting a truth as the truth. Cool bits of history, funny hoaxes, and the scary reality of propaganda are packed in simple bites easy to absorb. Excellent design and a clear narrative help readers navigate the vast and fast-changing concept of news.—Kirkus

Robin Terry Brown’s “Breaking the News,” written in consultation with several journalism luminaries, is laid out the way magazines used to be, with captivating images, bite-size fact-filled blurbs and intuitive design. “Breaking the News” urges young people to leave their social media feeds and “read reliable news and information from many different sources.”—The New York Times