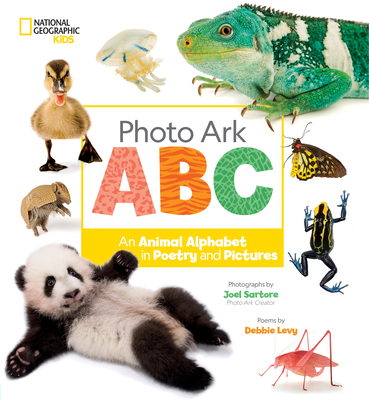 
In Stock—Click for Locations
From armadillo to zebra, this enchanting picture book pairs the stunning photography of National Geographic photographer Joel Sartore with playful poems by New York Times best-selling author Debbie Levy to represent the letters of the alphabet and celebrate the diversity of the animal world.
This unique alphabet book is a dazzling journey through the animal kingdom. It invites children and their families to linger over Sartore’s spectacular portraits of animals both familiar and little known, to look these incredible creatures in the eye and marvel at their shape, form, and expression. Each animal is showcased in an original poem by Levy, whose clever, quirky verse and exuberant wordplay will delight readers young and old. The photos are part of Sartore’s mission to photograph all the animal species in human care, with special attention given to rare and endangered species.
A beautiful gift book for animal lovers of any age, and a very special read-aloud ABC book for young children.
More popular National Geographic gift books for animal lovers include:
DEBBIE LEVY is the author of more than 25 books of nonfiction, fiction, and poetry for young people, including New York Times best seller I Dissent: Ruth Bader Ginsburg Makes Her Mark, winner of the Sydney Taylor Book Award and National Jewish Book Award. Her most recent releases include Becoming RBG: Ruth Bader Ginsburg’s Journey to Justice (graphic novel–style biography); This Promise of Change: One Girl’s Story in the Fight for School Equality; and a new edition of her 2010 book, The Year of Goodbyes: A True Story of Friendship, Family, and Farewells. Other books include We Shall Overcome: The Story of a Song. A former lawyer and newspaper editor, Levy lives in Maryland. Web: debbielevybooks.com. Twitter: @debbielevybooks. Facebook: Debbie Levy.


Award-winning photographer and regular contributor to National Geographic magazine, Joel Sartore is the founder of the National Geographic Photo Ark, a 25-year documentary project to fight global extinctions by photographing every animal species in human care. Sartore estimates the total to be 13,000; to date he has photographed more than 10,000. In addition to the work he has done for National Geographic, Sartore has contributed to Audubon magazine, Life, the New York Times, Sports Illustrated, and numerous book projects. Sartore and his work have been the subject of several national broadcasts, including National Geographic’s Explorer, NBC Nightly News, NPR’s Weekend Edition, Fresh Air with Terry Gross, and the PBS documentary series Rare: Creatures of the Photo Ark. He is also a regular contributor on the CBS Sunday Morning show. Known for his sense of humor and midwestern work ethic, Sartore travels the world to find new animals but is always happy to come home to Lincoln, Nebraska. Web: joelsartore.com. Instagram: joelsartore. Facebook: Joel Sartore, photographer. Twitter: @joelsartore
2022 Notable Book in Poetry Award, National Council of Teachers of English (NCTE)—NCTE

The delightful animals of "Photo Ark" are paired with playful poetry to show off the alphabet in all its abecedarian glory.... [It’s] quite lovely to see something for “X” that isn’t your same old X-ray fish."—Elizabeth Bird, School Library Journal, "31 Days, 31 Lists: 2021 Poetry for Kids"