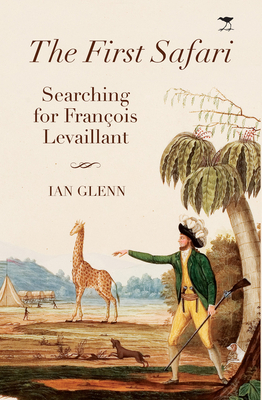 
Special Order—Subject to Availability
The First Safari tells how, for a quarter of a century, Ian Glenn searched for Francois Levaillant’s notebooks and the fate of his collection and tried to solve puzzles and mysteries of Levaillant’s life and times.
Levaillant was the first and greatest South African birder, noted ornithologist, explorer, naturalist, zoological collector and anthropologist of the Cape. He collected thousands of specimens of birds and subsequently published the six-volume Histoire Naturelle des Oiseaux d’Afrique between 1799 and 1808. His contribution to ornithology in Africa was immeasurable, and some of his specimens still exist in museums in Europe.
Through his travels, he also shaped a range of media genres: the hunting narrative; the safari; the anthropological field record; the illustrated and mapped first-person account of travel we associate with National Geographic stories; the colonial adventure story with a well-armed hero; the erotic exotic; the investigative report on colonial brutality.
Ian Glenn has edited and co-translated an English translation of Levaillant’s Voyage into the Interior of Africa for the Van Riebeeck Society and co-authored the Brenthurst Press edition of François Levaillant and the Birds of Africa. He has written or co-authored many scholarly articles on Levaillant and curated the King’s Map exhibition at the Iziko Museum in 2012–2013. Ian Glenn studied at the University of KwaZulu-Natal, the University of York and the University of Pennsylvania, from which he graduated. He taught in and was Head of the Department of English at the University of Cape Town (UCT) and then helped found a new Centre for Film and Media Studies of which he was Director and First Professor of Media Studies. He is Emeritus Professor of Media Studies at UCT and a research associate at the University of the Free State. His current research interests include rhino poaching and the history of wildlife.