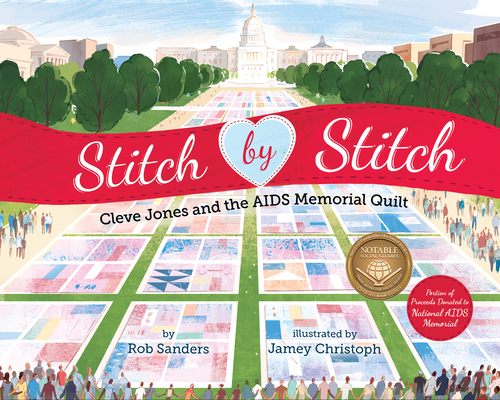 From the blanket that his great-grandmother made for him as a boy, to the friends he gathered together in San Francisco as a young man, to the idea for a monument sewn of fabric and thread, Cleve Jones' extraordinary life seems to have been stitched together bit by bit, piece by piece.

Mentored by Harvey Milk, Jones first had the vision for what became the AIDS Memorial Quilt during a candlelight memorial for Milk in 1985. Along with friends, Cleve created the first panels for the quilt in 1987. The AIDS Memorial Quilt grew to be one of the largest public arts projects ever and helped grow awareness of HIV and AIDS. The Quilt is an iconic symbol of hope and remembrance and is Jones' shining achievement. It has since toured the world and been seen by millions. This evocative biography is a touching tribute to Jones' life of advocacy, the positive effects of a community working towards a common goal, and an inspiring story for young readers. Includes a timeline and extensive back matter.
Rob Sanders is a former elementary school teacher who writes funny and fierce fiction and non-fiction. He is the author of such acclaimed titles as Pride: The Story of Harvey Milk and the Rainbow Flag, Stonewall: A Building. An Uprising. A Revolution, and Peaceful Fights for Equal Rights. He lives in Brandon, Florida. Visit RobSandersWrites.com, @YesRobSandersWrites on Facebook, and @RobSandersWrite on Twitter. Jamey Christoph has created illustrations that have appeared in the New York Times and the San Francisco Chronicle, and has received distinguished recognition from the Society of Illustrators for his work on Gordon Parks: How the Photographer Captured Black and White America. Jamey lives in Ohio with his partner and two dogs. Visit jameychristoph.com, @JameyChristophIlustration on Facebook, and @JameyChristoph on Instagram.