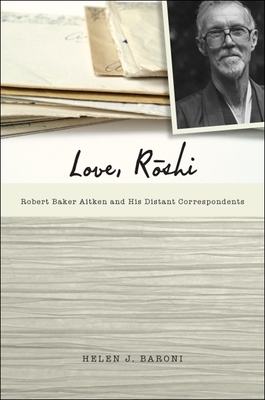 
Special Order—Subject to Availability
Love, Roshi explores the relationship between Robert Baker Aitken (1917-2010), American Zen teacher and author, and his distant correspondents, individuals drawn to Zen teachings and practice through books. Aitken, founder of the Honolulu Diamond Sangha, promoted Zen to a wide audience in works such as Taking the Path of Zen and The Mind of Clover. Aitken's twentieth-century American Zen valued social justice and was compatible with work and family life.

Helen J. Baroni makes use of Aitken's extensive correspondence preserved in an archive at the University of Hawaii to provide a window to view the beliefs and practices of the least-studied--and a difficult to study--segment of the Western Buddhist community, Buddhist sympathizers and solo practitioners. The book looks at the concerns of these correspondents, which included questions on meditation, dealing with isolation as a Buddhist, finding teachers and disillusion with teachers, and being a Buddhist in prison, among a myriad of other matters. The writers' letters reveal much about their notion of Zen and their image of a Zen master. Coverage of Aitken's responses provides insight into the accommodation of solo practitioners and into the development of a particular strain of American Buddhism.
Helen J. Baroni is Associate Professor of Religion at the University of Hawai'i at Manoa. She is the author of Iron Eyes: The Life and Teachings of Ōbaku Zen Master Tetsugen Dōkō, also published by SUNY Press.