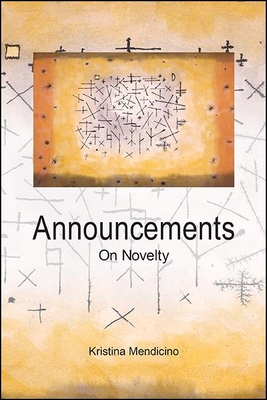 
Not On Our Shelves—Ships in 1-5 Days
(This book cannot be returned.)
Walter Benjamin claimed that the notion of novelty took on unprecedented importance with the growth of high capitalism in the nineteenth century. In this book, Kristina Mendicino analyzes a selection of canonical texts that reflect profound concern with novelty and its apparent contrary, the eternal return of the same, including Nietzsche's Thus Spoke Zarathustra, Baudelaire's lyric and prose poetry, and Marx and Engels's Communist Manifesto. She also addresses Eternity by the Stars by Louis-Auguste Blanqui, who is less well known and often underestimated in considerations of his significance for revolutionary political theory. Mendicino argues that the notion of a novum cannot be understood without attentiveness to the language of announcement, not least of all because the "new" has always been associated with a particular mode of linguistic performance. Through close readings of emphatically annunciatory texts, she demonstrates how the extreme possibilities of expression that they present through specific citational and rhetorical praxes render the language of announcement overdetermined and anachronistic in ways that exceed any systematic account of historical time and experience. This excess in and through language is precisely what opens hitherto unheard of alternatives for conceiving of historical temporality and political possibility.