In the Catskills and My Boyhood (Paperback) 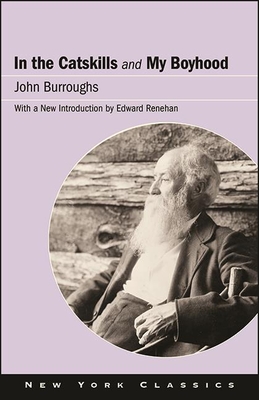 In the Catskills and My Boyhood (Paperback)


On Our Shelves Now at:
Henry James called John Burroughs (1837-1921) a more humorous, more available, and more sociable Thoreau. Walt Whitman in turn extolled Burroughs as a child of the woods, fields, hills--native to them in a rare sense (in a sense almost a miracle). Throughout his many books and essays, Burroughs was never more eloquent on nature themes than when writing about his native countryside: the woods, streams, and mountains of the Catskills in New York. In the Catskills collects the very best of Burroughs's writings about his birthplace in a book that is sure to be treasured by all lovers of the region as well as lovers of the literature of nature. This new edition includes an introduction by Burroughs biographer Edward Renehan and an additional work not included in previous editions, entitled My Boyhood.
John Burroughs was a well-known naturalist and prolific writer on his native Catskills. Edward Renehan is the author of more than twenty books, including John Burroughs: An American Naturalist. He lives in Wickford, Rhode Island.