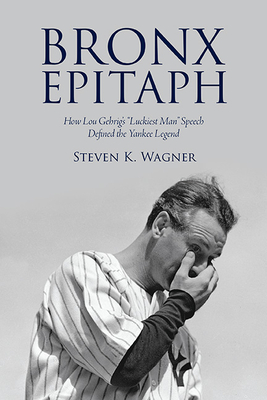 
Not On Our Shelves—Ships in 1-5 Days
When Lou Gehrig stepped to the plate on Independence Day 1939, he was not there to deliver a home run. For the first time in seventeen years, Gehrig was there to deliver his heart. In recent weeks he had lost his job as the Yankees' first baseman as well as the good health that had made him the team's respected Iron Horse and was facing a death sentence. Nervous and fidgety as he walked through a forest of microphones, Gehrig collected himself and delivered thirteen words that will live forever: Today I consider myself the luckiest man on the face of the earth.

Bronx Epitaph, the first comprehensive look at the slugger's epic speech, is the story of Lou Gehrig's finest hour, a homily of so little consequence when first delivered that few newspapers published more than a sentence or two the following day. Over time, however, Gehrig's Luckiest Man speech has settled into a sphere so timeless and essential that it seems he delivered it only yesterday. It was, to be sure, his Bronx Epitaph.
Steven K. Wagner is a freelance writer. His many books include Game Won: How the Greatest Home Run Ever Hit Sparked the 1988 Dodgers to Game One Victory and an Improbable World Series Title and The Four Home Runs Club: Sluggers Who Achieved Baseball's Rarest Feat.