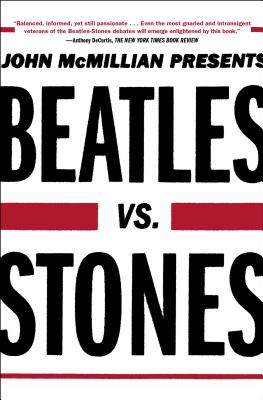 
Not On Our Shelves—Ships in 1-5 Days
A lively examination of the most legendary (and least understood) rivalry in the annals of rock ’n’ roll: “Beatles vs. Stones is one of the best rock biographies I have seen this year…If you thought you knew everything there was to know about these two groups, think again” (Seattle Post-Intelligencer).

In the 1960s an epic battle was waged between the two biggest bands in the world—the lovable Beatles and the bad-boy Rolling Stones. Both groups liked to maintain that they weren’t really “rivals”—that was just a media myth, they politely said—and yet they plainly competed for commercial success and aesthetic credibility. On both sides of the Atlantic, fans often aligned themselves with one group or the other. In Beatles vs. Stones, John McMillian gets to the truth behind the ultimate rock and roll debate.

“Fun and eye-opening . . . If you thought you knew everything there was to know about these two groups, think again. . . . John McMillian has done something I thought was no longer possible. He has written a book with a fresh perspective about these rock legends. . . . Beatles vs. Stones is one of the best rock biographies I have seen this year."
— Seattle Post-Intelligencer

“Engaging . . . Nuanced . . . McMillian uses historical rigor to pull this conversation out from the jaws of celebrity memoir. His account pulls no punches, and injects new vitality into a well-worn subject. . . . McMillian’s greatest success here is his ability to dispense with the tidy, nostalgia-soaked versions of the counterculture that are so prevalent in rock history.”
— Salon

“What is there that's left to be said about such a tired debate in 2013? As it turns out, there's still plenty to be said. . . . Beatles vs. Stones takes on a wholly different angle on how the greatest rock 'n' roll rivalry of all time was fostered by the fans, the music industry, the media, and by the bands themselves. By bringing to light mounds of source materials that most scholars and critics have never mined, namely the alternative newspapers and fan magazines of the late '60s and early '70s, McMillian taps into the stories of both bands as they unfold. By tracing their evolutions, side-by-side, as they appeared in the underground publications of the times, McMillian offers fresh insight into the dynamics of both groups as they grew and changed, with a real-time and palpable sense of excitement.”
— Creative Loafing

“Incisive . . . Masterful . . . McMillian works a certain magic here. . . . Beatles vs. Stones is the best kind of pop culture study, revivifying familiar material while stimulating the reader to question his own assumptions and tastes.”
— American Spectator

“A delightful read . . . I’ve no idea whether universities still offer classes on the great rock and roll acts of the ’60s and ’70s, but McMillian’s Beatles vs. Stones ought to be included in any such curriculum.”
— Russ Smith, Splicetoday.com