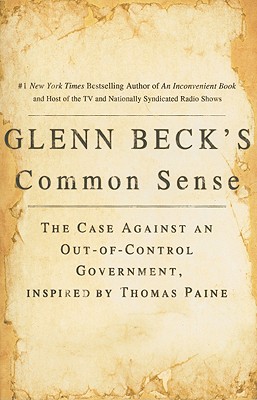 
Not On Our Shelves—Ships in 1-5 Days
Glenn Beck, the New York Times bestselling author of The Great Reset, revisits Thomas Paine's Common Sense.

In any era, great Americans inspire us to reach our full potential. They know with conviction what they believe within themselves. They understand that all actions have consequences. And they find commonsense solutions to the nation’s problems.

One such American, Thomas Paine, was an ordinary man who changed the course of history by penning Common Sense, the concise 1776 masterpiece in which, through extraordinarily straightforward and indisputable arguments, he encouraged his fellow citizens to take control of America’s future—and, ultimately, her freedom.

Nearly two and a half centuries later, those very freedoms once again hang in the balance. And now, Glenn Beck revisits Paine’s powerful treatise with one purpose: to galvanize Americans to see past government’s easy solutions, two-party monopoly, and illogical methods and take back our great country.
Glenn Beck, the nationally syndicated radio host and founder of TheBlaze television network, has written thirteen #1 bestselling books and is one of the few authors in history to have had #1 national bestsellers in the fiction, nonfiction, self-help, and children’s picture book genres. His recent fiction works include the thrillers Agenda 21, The Overton Window, and its sequel, The Eye of Moloch; his many nonfiction titles include The Great Reset, Conform, Miracles and Massacres, Control, and Being George Washington. For more information about Glenn Beck, his books, and TheBlaze television network, visit GlennBeck.com and TheBlaze.com.