Those Who Were There: Ninety-Two True Stories of Combat Missions Flown over North Vietnam (Paperback) 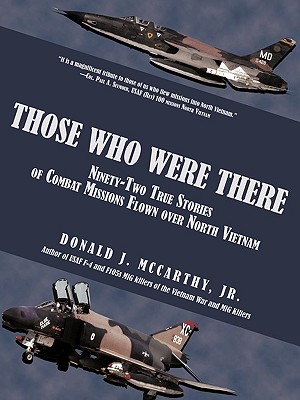 Those Who Were There: Ninety-Two True Stories of Combat Missions Flown over North Vietnam (Paperback)


Not On Our Shelves—Ships in 1-5 Days
(This book cannot be returned.)
Many outstanding air force pilots and aircrew members share their first hand combat experiences, providing ninety-two firsthand accounts of air missions flown against the most heavily-defended targets in North Vietnam. The primary mission of the United States Air Force during the period of 1965-73 was to concentrate on air strikes.

Read the personal accounts of the air force aircrews that clearly demonstrate undaunted determination, indomitable courage, professional skill, and extraordinary heroism-despite the most intense air defenses faced by a modern air force and the restrictions imposed on the pilots of the United States Air Force (and Navy) by the U. S. government.

Limitations were regularly imposed upon aircrews during the war. During the Rolling Thunder campaign, (1965-1968) tactics and target selections were decided at the White House, with no airman in attendance. President Johnson boasted on national television, "They can't even bomb an outhouse without my approval." If the air war in Vietnam was all in vain, it is the policy makers, not the warriors, who must be held accountable. Gain a new understanding of the Vietnam War with Those Who Were There: Ninety-Two True Stories of Combat Missions Flown over North Vietnam.