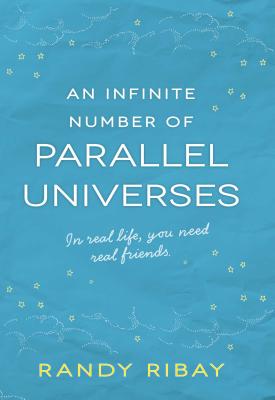 
Not On Our Shelves—Ships in 1-5 Days
Four friends from wildly different backgrounds have bonded over Dungeons & Dragons since the sixth grade. Now they're facing senior year and a major shift in their own universes. Math whiz Archie is struggling with his parents' divorce after his dad comes out as gay. Mari is terrified of her adoptive mother's life-altering news. Dante is carrying around a huge secret that is proving impossible to keep hidden. And when Sam gets dumped by the love of his life, everyone is ready to join him on a cross-country quest to win her back. The four quickly discover that the road is not forgiving, and that real life is no game. They must face a test of friendship where the stakes are more than just a roll of the dice--they are life and death.
Randy Ribay is the author of An Infinite Number of Parallel Universes, a Simon & Schuster book.
"A legitimate geeky book written by an awesomely geeky man who understands the classic geeky teenager. And. it. Was. On. Point. The trip of a lifetime. You want a diverse, thought-provoking, hilarious book? This is it. Join the party." --YA Books Central

"A novel written by a geek, for geeks, that manages to touch on so much, and packs a surprising, emotional punch. The characters and their journey together will stick with you for a while." --BookRiot

"The stories intertwine into a single narrative in which teens will be invested in all parties equally.... A quiet and meaningful story." --School Library Journal

"Ribay sets up his characters' dilemmas in alternating third-person sections for the first half of the book, leading to the road trip scenes in which the friends' copious issues are unpacked." --Horn Book Magazine

"Of all the grades, senior year of high school is most fraught with emotion. Randy Ribay, of Camden, has done a terrific job of capturing these emotions in his novel. Ribay takes us inside the lives of four teenagers on a cross-country odyssey and gives equal weight to all. It's one of those trips we don't mind going on because most of us can recall facing that senior year of high school when we knew life was about to change." --The Star Ledger