Votes for Women! The American Woman Suffrage Movement and the Nineteenth Amendment: A Reference Guide (Guides to Historic Events in America) (Hardcover) 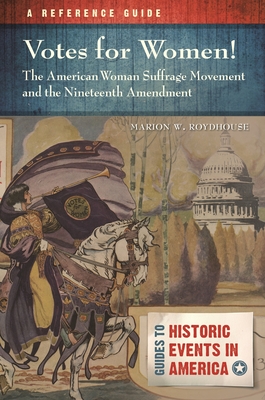 Votes for Women! The American Woman Suffrage Movement and the Nineteenth Amendment: A Reference Guide (Guides to Historic Events in America) (Hardcover)

Votes for Women provides an updated consideration of the questions raised by the mass movement to gain equality and access to power in our democracy. It interprets the campaigns for woman suffrage from the 1830s until 1920, analyzes the impact of the Nineteenth Amendment, and presents primary documents to allow a glimpse into the minds of those who campaigned for and against woman suffrage.

The book's examination of the 70-year woman suffrage campaign shows how the movement faced enormous barriers, was perceived as threatening the very core of accepted beliefs, and was a struggle that showcased the efforts of strong protagonists and brilliant organizers who were intellectually innovative and yet were reflective of the great divides of race, ethnicity, religion, economics, and region existing across the nation. Included within the narrative section are biographies of significant personalities in the movement, such as militant Alice Paul and anti-suffragist Ida Tarbell as well as more commonly known leaders Elizabeth Cady Stanton and Susan B. Anthony.

Marion W. Roydhouse, PhD, is emerita professor of history and founding director of the Center for Teaching Innovation and Nexus Learning at Philadelphia University, Philadelphia, PA.