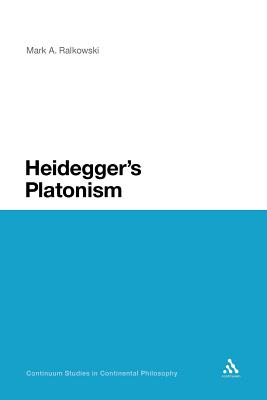 This is book number 81 in the Continuum Studies in Continental Philosophy series.

Heidegger's Platonism challenges Heidegger's 1940 interpretation of Plato as the philosopher who initiated the West's ontological decline into contemporary nihilism. Mark A. Ralkowski argues that, in his earlier lecture course, On the Essence of Truth, in which he appropriates Plato in a positive light, Heidegger discovered the two most important concepts of his later thought, namely the difference between the Being of beings and Being as such, and the 'belonging together' of Being and man in what he eventually calls Ereignis, the 'event of appropriation'. Ralkowski shows that, far from being the grand villain of metaphysics, Plato was in fact the gateway to Heidegger's later period. Because Heidegger discovers the seeds of his later thought in his positive appropriation of Plato, this book argues that Heidegger's later thought is a return to and phenomenological transformation of Platonism, which is ironic not least because Heidegger thought of himself as the West's first truly post-Platonic philosopher.
Mark A. Ralkowski teaches philosophy at the University of New Mexico, USA. He edited Carol J. White's Time and Death: Heidegger's Analysis of Finitude (Ashgate, 2005).