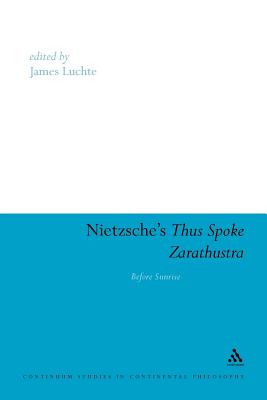 This is book number 42 in the Continuum Studies in Continental Philosophy series.

Nietzsche famously regarded Thus Spoke Zarathustra as his greatest work. However, despite Nietzsche's pervasive influence upon the philosopher and non-philosopher alike, and his own intense regard for Zarathustra, there has been relatively little serious study of Nietzsche's magnum opus.
This book seeks to address this gap in the available literature by taking Thus Spoke Zarathustra seriously, not only with respect to its impact on the interpretation of Nietzsche's philosophy, but also in light of the broader questions of the relationships between poetry, philosophy and existence. Fifteen leading Nietzsche scholars examine the structure, method, style and sources of Zarathustra as a philosophical text and its relationship to methodological and metaphilosophical questions amid the broader discussions of philosophy. The book also explores the implications of the philosophical questioning, interventions and teachings of Zarathustra with respect to both its negative engagement with the tradition and its attempt to set forth something new under the sun in its affirmative overcoming of nihilism.

James Luchte is Lecturer of Philosophy and Programme Co-ordinator of the MA in European Philosophy at the University of Wales, Trinity St. David, in Wales. His other publications include The Peacock and the Buffalo: The Poetry of Nietzsche (translator), Pythagoras and the Doctrine of Transmigration, Heidegger's Early Philosophy: The Phenomenology of Ecstatic Temporality, Nietzsche's Thus Spoke Zarathustra: Before Sunrise (editor) and Kant's Critique of Pure Reason: A Reader's Guide (all Continuum). He has also published numerous articles on various topics in European Philosophy.