Deleuze and Ricoeur: Disavowed Affinities and the Narrative Self (Continuum Studies in Continental Philosophy #94) (Paperback) 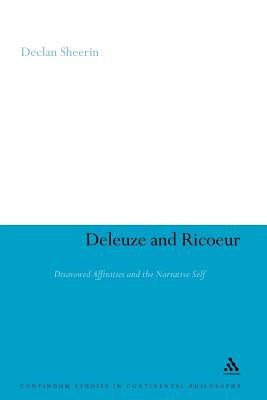 Deleuze and Ricoeur: Disavowed Affinities and the Narrative Self (Continuum Studies in Continental Philosophy #94) (Paperback)

This is book number 94 in the Continuum Studies in Continental Philosophy series.

What is the self? Is it the impregnable cogito of Descartes or the shattered self of Nietzsche? Or has it become serendipitously constituted from pieces of fairy tales and novels, childhood comics and soap operas - a multitude of forces culled from fashion, modern myth, culture and recreation? Or must we still convince ourselves, like Rousseau, that the self can never be tainted; that it is, above all else, irrefrangible?

Paul Ricoeur proposed that the self is formed within the narratives we tell of ourselves, that it is itself a form of narrative. But is this enough? Could a self cohere in a multitude of potential narratives or find unity among its stories? In this book, Declan Sheerin challenges the theory that the self is narrative alone or that concordance reigns over discordance in the self. Drawing upon the works of Gilles Deleuze, he proposes that deep to the sense of a unified, represented self is a more fundamental self of difference, a self that is more than merely coherent narrative.
Declan Sheerin has a PhD in Philosophy from University College Dublin. He currently lives and works as a consultant child psychiatrist in Ireland.