In the Shadow of Phenomenology: Writings After Merleau-Ponty I (Continuum Studies in Continental Philosophy #77) (Paperback) 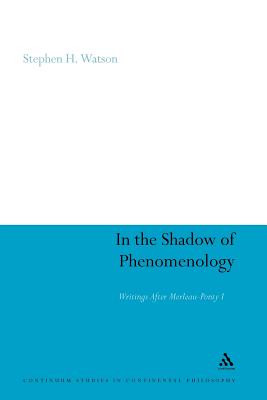 In the Shadow of Phenomenology: Writings After Merleau-Ponty I (Continuum Studies in Continental Philosophy #77) (Paperback)

This is book number 77 in the Continuum Studies in Continental Philosophy series.

Maurice Merleau-Ponty is widely known for his emphasis on embodied perceptual experience. This emphasis initially relied heavily on the positive results of Gestalt psychology in addressing issues in philosophical psychology and philosophy of mind from a phenomenological standpoint. Eventually he transformed this account in light of his investigations in linguistics, aesthetics, and the philosophy of history and institutions. Far less work has been done in addressing his evolving conception of philosophy and how this account influenced more general philosophical issues in epistemology, accounts of rationality, or its status as theoretical discourse. Merleau-Ponty's own contributions to these issues and, in particular, the theoretical status of the phenomenological account that resulted, have provoked varying responses. On the one hand, some commentators have understood his work to be a regional application of Husserl's foundational account of phenomenology. On the other hand, some commentators have questioned whether, in the final analysis, Merleau-Ponty was a phenomenologist at all. In In the Shadow of Phenomenology, Stephen H. Watson offers an in depth analysis of these responses and the complications and development of Merleau-Ponty's position.
Stephen H. Watson is Professor of Philosophy at the University of Notre Dame, USA. His previous publications include Traditions I (Indiana University Press, 1997), Traditions II (Indiana University Press, 2001) and Reinterpreting the Political (SUNY Press, 1998).