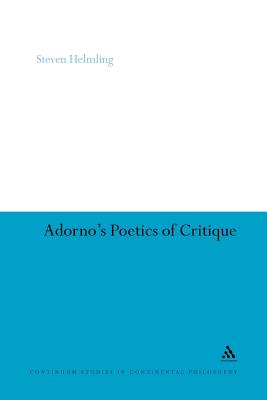 Adorno's Poetics of Critique is a critical study of the Marxist culture-critic Theodor W. Adorno, a founding member of the Frankfurt school and widely regarded today as its most brilliant exponent.
Steven Helmling is centrally concerned with Adorno's notoriously difficult writing, a feature most commentators acknowledge only to set it aside on the way to an expository account of 'what Adorno is saying'. By contrast, Adorno's complex writing is the central focus of this study, which includes detailed analysis of Adorno's most complex texts, in particular his most famous and complicated work, co-authored with Max Horkheimer, Dialectic of Enlightenment.
Helmling argues that Adorno's key motifs - dialectic, concept, negation, immanent critique, constellation - are prescriptions not merely for critical thinking, but also for critical writing. For Adorno the efficacy of critique is conditioned on how the writing of critique is written. Both in theory and in practice, Adorno urges a 'poetics of critique' that is every bit as critical as anything else in his 'critical theory.

Steven Helmling is Professor of English at the University of Delaware, USA. His previous publications include The Success and Failure of Fredric Jameson (SUNY Press, 2001) and The Esoteric Comedies of Carlyle, Newman and Yeats (CUP, 1988).