The Cultural Politics of Analytic Philosophy: Britishness and the Spectre of Europe (Continuum Studies in British Philosophy #104) (Paperback) 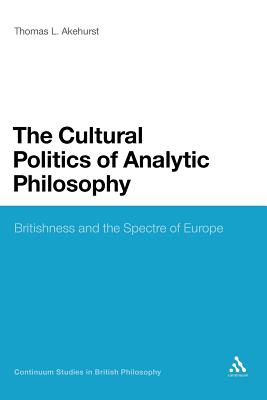 The Cultural Politics of Analytic Philosophy: Britishness and the Spectre of Europe (Continuum Studies in British Philosophy #104) (Paperback)

The Cultural Politics of Analytic Philosophy examines three generations of analytic philosophers, who between them founded the modern discipline of analytic philosophy in Britain. The book explores how philosophers such as Bertrand Russell, A.J. Ayer, Gilbert Ryle and Isaiah Berlin believed in a link between German aggression in the twentieth century and the nineteenth-century philosophy of Hegel and Nietzsche.
Thomas L. Akehurst thus identifies in this political critique of continental philosophy the origins of the hugely significant faultline between analytic and continental thought, an aspect of twentieth-century philosophy that is still poorly understood.
The book also uncovers a tripartite alliance in British analytic philosophy, between nation, political virtue and philosophical method. In revealing this structure behind the assumptions of certain analytical thinkers, Akehurst challenges the conventional wisdom that sees analytic philosophy as a semi-detached narrowly academic pursuit. On the contrary, this important book suggests that the analytic philosophers were espousing a national philosophy, one they believed operated in harmony with British thinking and the British values of liberty and tolerance.

Thomas L. Akehurst teaches history and politics at the University of Sussex, UK and The Open University, UK