Wittgenstein and Value: The Quest for Meaning (Continuum Studies in British Philosophy #105) (Paperback) 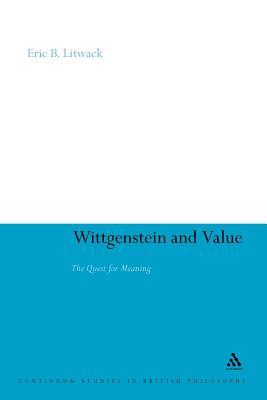 Wittgenstein and Value: The Quest for Meaning (Continuum Studies in British Philosophy #105) (Paperback)

By Eric B. Litwack


Not On Our Shelves—Ships in 1-5 Days
(This book cannot be returned.)
Ludwig Wittgenstein (1889-1951) was one of the most important and influential thinkers of the 20 th century. In Wittgenstein and Value, Eric B. Litwack attempts to clarify his many challenging ideas and arguments related to the notion of value and the implications of his work for debates in contemporary ethics, aesthetics and religious studies. Litwack shows that Wittgenstein was engaged in a project of philosophical anthropology, which set him against some of the main currents of 20 th century intellectual life. The book explores the key notions in Wittgenstein's philosophy of mind and language and reveals how he developed a consistently expressionistic conception of value, in its many manifestations. Litwack also examines some of the key arguments of post-Wittgensteinian philosophers in the analytic Anglo-American tradition and explores the ways in which they have used Wittgenstein's arguments in addressing contemporary philosophical problems.
Eric B. Litwack is a philosopher in the faculty of Queen's University at Kingston's International Study Centre in East Sussex, UK.