Conflict, Power, and Multitude in Machiavelli and Spinoza: Tumult and Indignation (Continuum Studies in Philosophy #61) (Hardcover) 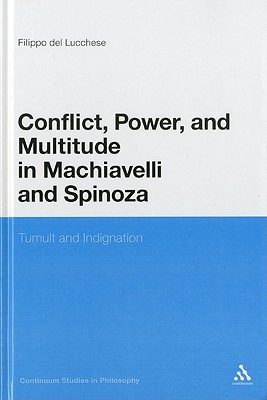 Conflict, Power, and Multitude in Machiavelli and Spinoza: Tumult and Indignation (Continuum Studies in Philosophy #61) (Hardcover)


Not On Our Shelves—Ships in 1-5 Days
(This book cannot be returned.)
Conflict, Power and Multitude in Machiavelli and Spinoza explores Spinoza's political philosophy by confronting it with that of Niccol Machiavelli.
Filippo Del Lucchese conducts a study of the relationship between Machiavelli and Spinoza from a perspective at once philosophical, historical and political.
The book begins by showing how closely tied the two thinkers are in relation to realism. Del Lucchese then goes on to examine the theme of conflict as a crucial element of an understanding of Machiavelli and Spinoza's conceptions of modernity. The book concludes with an examination of the concept of 'multiplicity' and 'plural' expressions of politics, namely Machiavelli's popolo and Spinoza's multitudo. Overall, the Machiavelli-Spinoza axis offers a fruitful perspective through which to analyse the relationship between contending ideas of modernity from a historical point of view, and provides an original point of departure for discussing some key theoretical, political and juridical notions that have resurfaced in contemporary debates.
Filippo Del Lucchese is Adjunct Professor and Visiting Researcher in English and Comparative Literary Studies at Occidental College, USA, and Adjunct Professor at the University of Picardie, France.