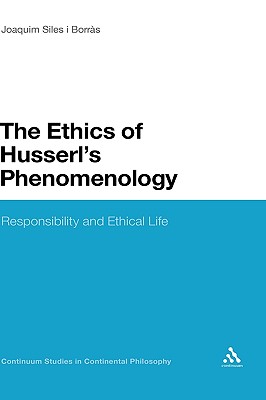 By Joaquim Siles I. Borras


Not On Our Shelves—Ships in 1-5 Days
(This book cannot be returned.)
The Ethics of Husserl's Phenomenology aims to relocate the question of ethics at the very heart of Husserl's phenomenology. This is based on the idea that Husserl's phenomenology is an epistemological inquiry ultimately motivated by an ethical demand that pervades his writing from the publication of Logical Investigations (1900-1901) up to The Crisis of European Sciences and Transcendental Phenomenology (1935).
Joaquim Siles-Borr's traces the ethical concepts apparent throughout Husserl's main body of work and argues that Husserl's phenomenology of consciousness, experience and meaning is ultimately motivated by an ethical demand, by means of which Husserl aims to re-define philosophy and re-found science, with the aim of making philosophy and science capable of dealing with the most pressing questions concerning the meaningfulness of human existence.
Joaquim Siles-Borras is Associate Lecturer in Philosophy at Manchester Metropolitan University, UK.