The Metaphysical Presuppositions of Being-In-The-World: A Confrontation Between St. Thomas Aquinas and Martin Heidegger (Paperback) 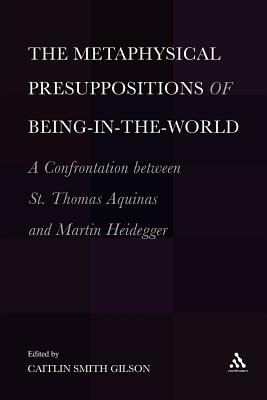 The Metaphysical Presuppositions of Being-In-The-World: A Confrontation Between St. Thomas Aquinas and Martin Heidegger (Paperback)


Not On Our Shelves—Ships in 1-5 Days
(This book cannot be returned.)
The Metaphysical Presuppositions of Being-in-the-World brings St. Thomas Aquinas and Martin Heidegger into dialogue and argues for the necessity of Christian philosophy. Through the confrontation of Heideggerian and Thomist thought, it offers an original and comprehensive rethinking of the nature of temporality and the origins of metaphysical inquiry.

The book is a careful treatment of the inception and deterioration of the four-fold presuppositions of Thomistic metaphysics: intentionality, causality, finitude, ananke stenai. The analysis of the four-fold has never before been done and it is a central and original contribution of Gilson's book. The four-fold penetrates the issues between the phenomenological approach and the metaphysical vision to arrive at their core and irreconcilable difference. Heidegger's attempt to utilize the fourfold to extrude theology from ontology provides the necessary interpretive impetus to revisit the radical and often misunderstood metaphysics of St. Thomas, through such problems as aeviternity, non-being and tragedy.
Caitlin Smith Gilson is Chair of the Faculty of Philosophy at the Pontifical College Josephinum in Ohio, USA.