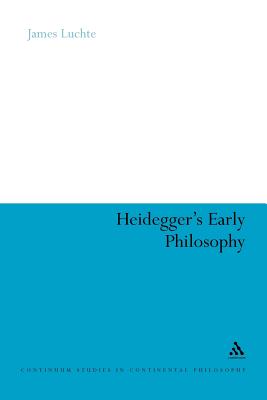 This is book number 67 in the Continuum Studies in Continental Philosophy series.

In Heidegger's Early Philosophy, James Luchte sets forth a comprehensive examination of Heidegger's phenomenology between 1924 and 1929, during which time Heidegger was largely concerned with a radical temporalization of thought. The book seeks to re-construct Heidegger's radical phenomenology through an interpretation of all his published and unpublished works of the period, including the 1920s lecture courses and his published works, Kant and the Problem of Metaphysics and his magnum opus, Being and Time. The book also explores Heidegger's relationship with other philosophers, such as Husserl, Kant and Leibniz, with respect to the question of the relationship of thought and temporality. The book addresses a significant void in the treatment of Heidegger's early phenomenology, emphasizing the importance of Heidegger's lecture courses and other works besides Being and Time, and thereby investigates the many fragments of Heidegger's work so as to more fully comprehend the meaning and significance of the original project. James Luchte makes an extraordinary and hugely important contribution to the field of Heidegger Studies.
James Luchte is Lecturer of Philosophy and Programme Co-ordinator of the MA in European Philosophy at the University of Wales, Trinity St. David, in Wales. His other publications include The Peacock and the Buffalo: The Poetry of Nietzsche (translator), Pythagoras and the Doctrine of Transmigration, Heidegger's Early Philosophy: The Phenomenology of Ecstatic Temporality, Nietzsche's Thus Spoke Zarathustra: Before Sunrise (editor) and Kant's Critique of Pure Reason: A Reader's Guide (all Continuum). He has also published numerous articles on various topics in European Philosophy.