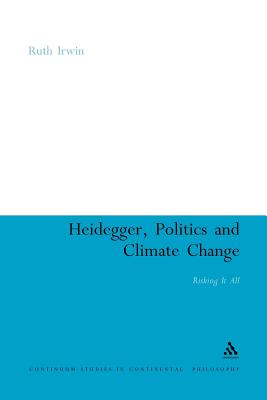 
Not On Our Shelves—Ships in 1-5 Days
(This book cannot be returned.)
The scale of some environmental problems, such as climate change and human overpopulation, exceed any one nation state and require either co-ordinated governance or a shift in the culture of modernity. Heidegger, Politics and Climate Change examines this crisis alongside Heidegger's ideas about technology and modernity. Heidegger suggests that refocusing on the primary questions that make it meaningful to be human - the question of Being - could create the means for alternative discourses that both challenge and sidestep the attempt for total surveillance and total control. He advocates recognising the problematic relationship humanity has with the environment and reinventing new trajectories of understanding ourselves and our planet. This book aims to properly integrate environment into philosophy and political theory, offering a constructive critique of modernity with some helpful suggestions for establishing a readiness for blue sky scenarios for the future. The book lays out the practical implications of Heidegger's ideas and engages with philosophy of technology, considering the constraints and the potentials of technology on culture and environment.
Ruth Irwin is Senior Lecturer in Business Ethics at Auckland University of Technology, New Zealand.