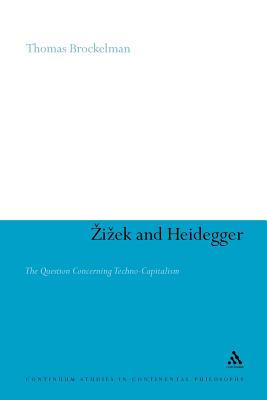 
Not On Our Shelves—Ships in 1-5 Days
(This book cannot be returned.)
++i++ek and Heidegger offers a radical new interpretation of the work of Slavoj ++i++ek, one of the world's leading contemporary thinkers, through a study of his relationship with the work of Martin Heidegger. Thomas Brockelman argues that ++i++ek's oeuvre is largely a response to Heidegger's philosophy of finitude, an immanent critique of it which pulls it in the direction of revolutionary praxis. Brockelman also finds limitations in ++i++ek's relationship with Heidegger, specifically in his ambivalence about Heidegger's techno-phobia. Brockelman's critique of ++i++ek departs from this ambivalence - a fundamental tension in ++i++ek's work between a historicist critical theory of techno-capitalism and an anti-historicist theory of revolutionary change. In addition to clarifying what ++i++ek has to say about our world and about the possibility of radical change in it, ++i++ek and Heidegger explores the various ways in which this split at the center of his thought appears within it - in ++i++ek's views on history or on the relationship between the revolutionary leader and the proletariat or between the analyst and the analysand.
Thomas Brockelman is Professor of Philosophy at Le Moyne College, USA. His previous publications include The Frame and the Mirror: On Collage and the Postmodern (Northwestern University Press, 2001).