The Grand Spas of Central Europe: A History of Intrigue, Politics, Art, and Healing (Hardcover) 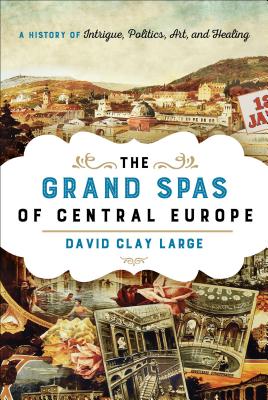 The Grand Spas of Central Europe: A History of Intrigue, Politics, Art, and Healing (Hardcover)


Special Order—Subject to Availability
The Grand Spas of Central Europe leads readers on an irresistible tour through the grand spa towns of Central Europe--fabled places like Baden-Baden, Bad Ems, Bad Gastein, Karlsbad, and Marienbad. Noted historian David Clay Large follows the grand spa story from Greco-Roman antiquity to the present, focusing especially on the years between the French Revolution and World War II, a period in which the major Central European Kurorte ("cure-towns") reached their peak of influence and then slipped into decline. Written with verve and affection, the book explores the grand spa towns, which in their prime were an equivalent of today's major medical centers, rehab retreats, golf resorts, conference complexes, fashion shows, music festivals, and sexual hideaways--all rolled into one. Conventional medicine being quite primitive through most of this era, people went to the spas in hopes of curing everything from cancer to gout. But often as not "curists" also went to play, to be entertained, and to socialize. In their heyday the grand spas were hotbeds of cultural creativity, true meccas of the arts. High-level politics was another grand spa specialty, with statesmen descending on the Kurorte to negotiate treaties, craft alliances, and plan wars. This military scheming was just one aspect of a darker side to the grand spa story, one rife with nationalistic rivalries, ethnic hatred, and racial prejudice. The grand spas, it turns out, were microcosms of changing sociopolitical realities--not at all the "timeless" oases of harmony they often claimed to be. The Grand Spas of Central Europe holds up a gilt-framed but clear-eyed mirror to the ever-changing face of European society--dimples, warts, and all.
David Clay Large is a senior fellow at the Institute of European Studies, University of California, Berkeley, and professor of history at the Fromm Institute, University of San Francisco. He has also taught at Smith College, Yale University, and Montana State University. Among his many books are Berlin, Nazi Games: The Olympics of 1936, and Munich 1972: Tragedy, Terror, and Triumph at the Olympic Games. Large divides his time between San Francisco and Bozeman, Montana.