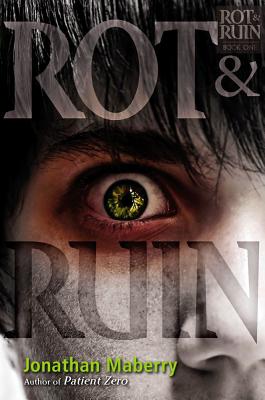 This is book number 1 in the Rot & Ruin series.

In the zombie-infested, post-apocalyptic America where Benny Imura lives, every teenager must find a job by the time they turn fifteen or get their rations cut in half. Benny doesn't want to apprentice as a zombie hunter with his boring older brother Tom, but he has no choice. He expects a tedious job whacking zoms for cash, but what he gets is a vocation that will teach him what it means to be human.
Jonathan Maberry is a New York Times bestselling author, five-time Bram Stoker Award winner, and comic book writer. He writes in multiple genres including suspense, thriller, horror, science fiction, fantasy, and adventure; and he writes for adults, teens, and middle grade. His works include the Joe Ledger thrillers, Glimpse, the Rot & Ruin series, the Dead of Night series, The Wolfman, The X-Files Origins: Devil’s Advocate, Mars One, and many others. Several of his works are in development for film and TV, including V Wars, which is a Netflix original series. He is the editor of high-profile anthologies including the X-Files books, Aliens: Bug Hunt, Out of Tune, Hardboiled Horror, Baker Street Irregulars, Nights of the Living Dead, and others. He lives in Del Mar, California. Visit him at JonathanMaberry.com and on Twitter (@JonathanMaberry) and Facebook.
"Thrilling, enticing, and surprisingly touching, Rot & Ruin will grip readers from beginning to end, and make them question who the real monsters are. It had me hooked from page one."--Heather Brewer, author of The Chronicles of Vladimir Tod series

"This is a romping, stomping adventure. And while most zombie novels are all about the brains, this one has a heart as well. With the dead prowling all around, fifteen-year-old Benny Imura learns the bittersweet lessons of life, love, and family in the great Rot & Ruin. Anyone with a pulse will enjoy this novel, and anyone with a brain will find plenty of food for thought inside."--Michael Northrop, author of Gentlemen

"George Romero meets The Catcher in the Rye in this poignant and moving coming of age novel set during zombie times. I welled up at the end, then smiled through my tears when I realized there was going to be a sequel. Bravo, Jonathan Maberry. Can't wait to read more." --Nancy Holder, New York Times bestselling author of Wicked and Possessions

"This is no ordinary zombie novel. Maberry has given it a soul in the form of two brothers who captured my heart from the first page and refused to let go."--Maria V. Snyder, New York Times bestselling author of Poison Study

* "The delineation between man and monster, survivor and victim is fiercely debated in Maberry’s thoughtful, postapocalyptic coming-of-age tale...In turns mythic and down-to-earth, this intense novel combines adventure and philosophy to tell a truly memorable zombie story, one that forces readers to consider them not just as flesh-eating monsters or things to be splattered, but as people.“--Publishers Weekly, starred review

"An impressive mix of meaning and mayhem."--Booklist

“Horror fans will appreciate the gorge-raising descriptions of the shambling zombies...while zombie-apocalypse aficionados will cotton to the solid world-building and refreshingly old-school undead. --Bulletin of the Center for Children's Books