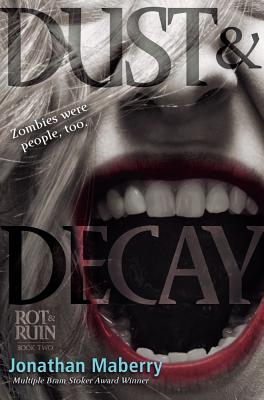 This is book number 2 in the Rot & Ruin series.

Six months have passed since the terrifying battle with Charlie Pink-eye and the Motor City Hammer in the zombie-infested mountains of the Rot & Ruin. It’s also six months since Benny Imura and Nix Riley saw something in the air that changed their lives. Now, after months of rigorous training with Benny’s zombie-hunter brother Tom, Benny and Nix are ready to leave their home forever and search for a better future. Lilah the Lost Girl and Benny’s best friend Lou Chong are going with them.

Sounds easy. Sounds wonderful. Except that everything that can go wrong does. Before they can even leave there is a shocking zombie attack in town. But as soon as they step into the Rot & Ruin they are pursued by the living dead, wild animals, insane murderers and the horrors of Gameland –where teenagers are forced to fight for their lives in the zombie pits. Worst of all…could the evil Charlie Pink-eye still be alive?

In the great Rot & Ruin everything wants to kill you. Everything…and not everyone in Benny’s small band of travelers will make it out alive.
Jonathan Maberry is a New York Times bestselling author, five-time Bram Stoker Award winner, and comic book writer. He writes in multiple genres including suspense, thriller, horror, science fiction, fantasy, and adventure; and he writes for adults, teens, and middle grade. His works include the Joe Ledger thrillers, Glimpse, the Rot & Ruin series, the Dead of Night series, The Wolfman, The X-Files Origins: Devil’s Advocate, Mars One, and many others. Several of his works are in development for film and TV, including V Wars, which is a Netflix original series. He is the editor of high-profile anthologies including the X-Files books, Aliens: Bug Hunt, Out of Tune, Hardboiled Horror, Baker Street Irregulars, Nights of the Living Dead, and others. He lives in Del Mar, California. Visit him at JonathanMaberry.com and on Twitter (@JonathanMaberry) and Facebook.
"The zombie attacks are bigger, better—and gorier—in this nearly non-stop action sequel to Rot & Ruin."
--Kirkus Reviews

"Maberry knows this world well; when the zombie apocalypse comes down, I want him on my team."
--Booklist